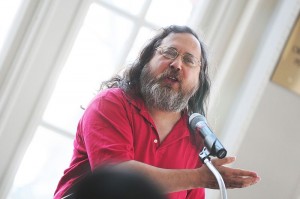 About Richard Stallman: Richard Matthew Stallman, often shortened to rms, is an American software freedom activist and computer programmer. In September 1983, he launched the GNU Project to create a free Unix-like operating system, and he has been the project’s lead architect and organizer. With the launch of the GNU Project, he initiated the free software movement

About the talk: Activities directed at including” more people in the use of digital technology are predicated on the assumption that such inclusion is invariably a good thing. It appears so, when judged solely by immediate practical convenience. However, if we also judge in terms of human rights, whether digital inclusion is good or bad depends on what kind of digital world we are to be included in. If we wish to work towards digital inclusion as a goal, it behooves us to make sure it is the good kind.

Two talks in Gothenburg 2011: This is the first of two speeches Richard will hold in Gothenburg 2011. Apart from this talk Richard is also a keynote speaker at FSCONS, the Nordic countries’ largest gathering for free culture, free software and a free society.

About the venue: The venue Runan is where Richard spoke last time in Gothenburg (2008).The address is Chalmersgatan 1